In the previous article, we talked about the basic concepts of PvP functions such as the UI interface, the turn-based mechanism, and the “tile” – distance unit. If you have not read through the previous article, you can click “here” so you don’t miss this very useful background information.

In this article, let’s learn about two concepts that greatly affect the strategy of PvP gameplay: Movement & Attack Range.

Movement is the stat that determines the distance the hero can travel in combat.

Units are converted to tiles, and there will be some special terrains that affect the movement of heroes.

In PvP maps, there will be obstacles (rocks, water, holes, …), players will need to recalculate their strategy as it affects the distance a hero can travel in a turn.

Hollow Terrain: Only heroes with Wings can travel through

Pond Terrain: Heroes have wings that can fly over. Walking characters will take 1.5-tile to go up and down from the pond terrain.

If a non-wing hero only has 3-tiles movement, it means the hero can only go down to the pond terrain, but not up.

Heroes’ movement stats are determined by the following factors:

In the current version, the equipped weapon will determine the hero’s base movement during PvP battles.

(This information is only for illustration purposes)

The attack range of Heroes in Faraland is very diverse. Let’s take a look at all types of attacks and the difference in their attack range.

The hero’s normal attack range depends on the weapon the hero uses. Each weapon will have its unique attack range: 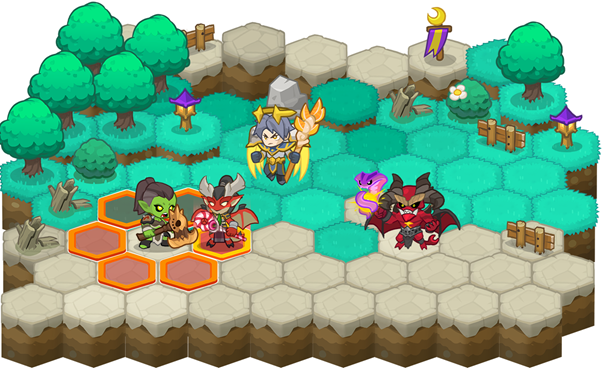 Bow (Range weapon): Can only attack targets in 3 to 4-tiles (can not attack  targets in 1-tile and 2-tiles range)

Active Skills have fixed cast range and damage, regardless of the weapon being equipped.

Some Passive skills will affect the hero’s attack range.

Faraland is an innovation project combining NFT technology and gaming experience. Not only are all exquisitely digital collectibles created using blockchain technology, but all NFT in Faraland can also be integrated into Faraland games later, which will help them increase the value. NFT is the soul of this project. Each Hero, NFT of Faraland, is unique. Each collectible is matchless, genuine, and varies in rarity. Faraland Universe has many different races like human, orc, angel, demon, Dragonborn, elf, and fairy, awaiting the users to discover.