Once upon a time, the land of Miesen consisted of the legend of a gate that connected parallel worlds. Initially, people on the other side of the gate came for the purpose of trading and making connections. As a result, Miesen became one of the busiest cities in the universe of Faraland.

However, not all realities were marvelous. Chaos ensued, a war among realities opened the portal of the multiverse, transforming Miesen from a beautiful land into eternal ice. The consequences of that war still remain.

Even though the war had ended, there were people who were trapped and could not return to their world from the other side of the gate. The citizens of Miesen called them “Demi”. The legend also says that, due to a different biological mechanism, Demi can only maintain their existence for a certain period of time in Faraland. They need to use a primordial energy source to keep them alive. .

That energy is called “Soul Stone”.

Demi Heroes have all the features of NFT heroes, players can use Soul Stone to randomly summon Demi among 7 warrior races in Faraland. They can be equipped with items, leveled up, and engaged in all sorts of activities exactly like a real NFT. Demi’s weakness is that to maintain their presence, they need to consume Soul Stone continuously, and the number of Soul Stone will increase gradually after each usage. In other words, they are heroes with an “expiry date”; therefore, the amount of Soul Stone they need to use will be extensive, which will make it almost impossible for players to prolong the existence of Demi Heroes. In return, summoned Demi only costs a small amount of Soul Stone initially. If you are lucky to summon a rare Demi, you can sell it to other players. The number of Demi Heroes is limitless. Players can buy Soul Stone on the market or participate in activities in the game to collect them.

Unlike Demi Heroes who depend on Soul Stone to be kept alive, NFT heroes are the true warriors of the Faraland universe, able to adapt and grow in strength continuously over time. They are announced as the soul of this project. NFT Heroes have a long-term investment value. Through the time of playing games and accumulating value, you can sell it to other players at a higher price. With a limit of 20,000 heroes, every action and mechanism in the game is designed to function NFT heroes. That’s why the price of NFTs with rare races is incredibly high in value. 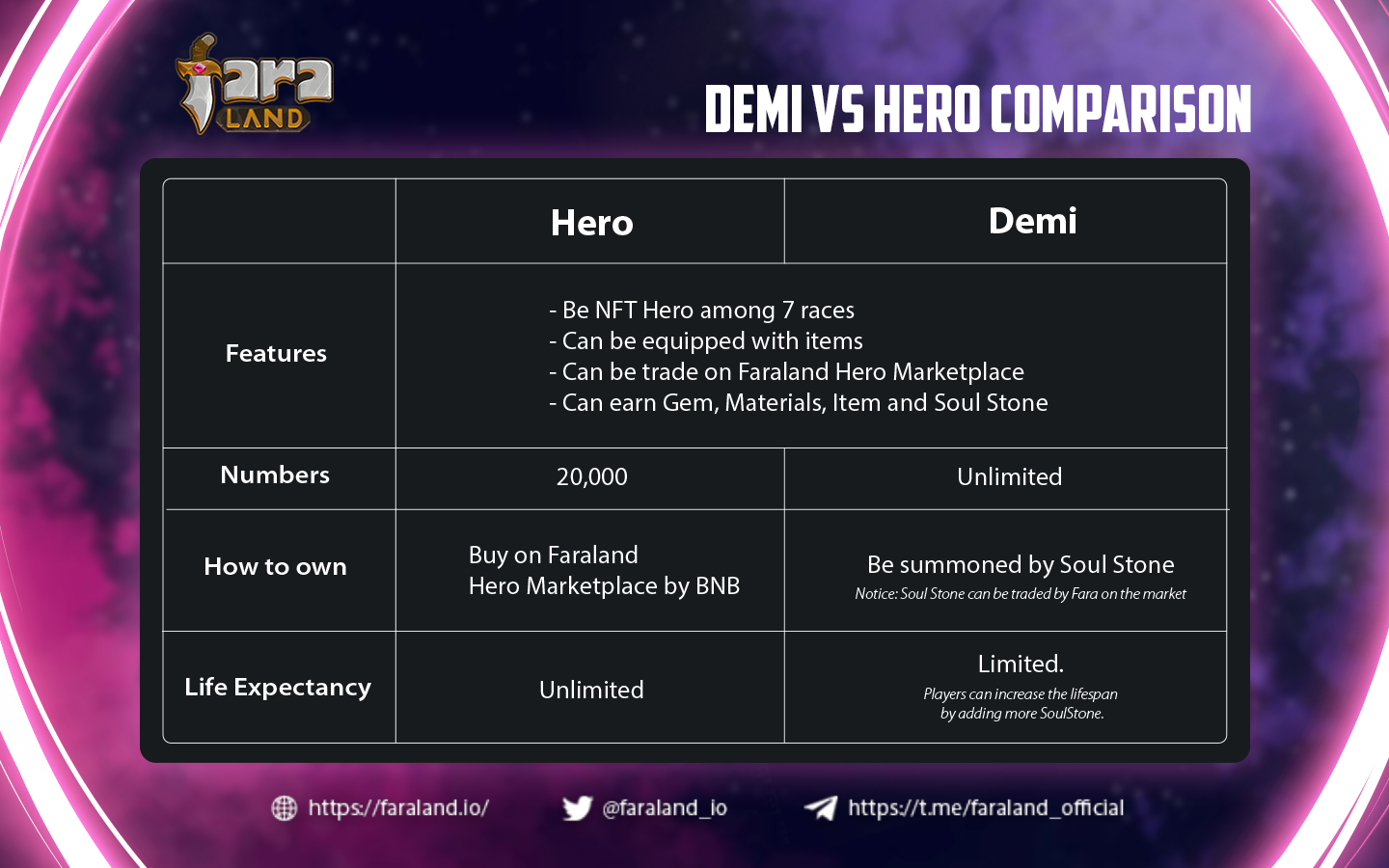 With distinct characteristics, players can flexibly use both types of heroes for different purposes. Demi heroes are suitable for new players who want to experience the game with a moderate amount of investment. Or you can also store rare Demis in order to complete some special quests. However, Demi alone is not enough to fully explore Faraland.

If you love the project and want to invest, an NFT Hero is the most viable choice. Each NFT Hero has its own purpose and position in the world of Faraland. After many hours of gameplay, you can accumulate values (levels, items) on heroes. The number of NFT Heroes is limited. Therefore, when the number of players increases, the value of NFT Heroes will also be increasing over time.

Hope this article can help people understand the difference between Demi Heroes and NFT Heroes. Choose the right heroes for yourself to join the adventure to explore the universe of Faraland.

Faraland is an innovation project combining NFT technology and gaming experience. Not only are all exquisitely digital collectibles created using blockchain technology, but all NFT in Faraland can also be integrated into Faraland games later, which will help them increase the value. NFT is the soul of this project. Each Hero, NFT of Faraland, is unique. Each collectible is matchless, genuine, and varies in rarity. Faraland Universe has many different races like human, orc, angel, demon, Dragonborn, elf, and fairy, awaiting the users to discover.

Faraland is different compared to other NFT projects where NFT is solely used for collection. With many exciting gaming activities, Faraland’s users can use their NFT heroes in many unique ways, from equipping them with powerful weapons or shining armors to engaging them in various thrilling battles. It’s a solid and exciting game with a fundamental and engaging storyline. We also focus on the “play to earn” mechanism, making Faraland far beyond a regular game. A variety of options are also available for users, including reinvesting in the game, making your heroes stronger, or cashing out. Our vision is to make Faraland a “dream job” by providing players worldwide opportunities to generate regular income from the project.